I don’t know what it is about me, but when I feel like the masses are being slighted, I feel compelled to take up their cause and fight. I call this my inner Norma Rae. Have you seen that movie from the late 70s? The one where Sally Field starts a revolution of the textile industry by standing up holding a big, bold sign that says “UNION” on it?

It was hard. It was unpopular. It causes trouble at home and at work. But it’s the right thing to do, so up she goes. Sign over her head. And that leads to a revolution. Or at least that is how it goes in the movies. 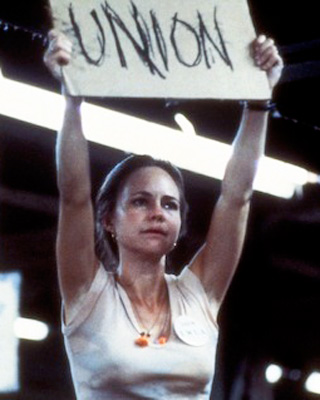 Standing up. We all have to do it.

The last few days have been Norma Rae days for me. I am sure I didn’t start a revolution, but I am also sure that the doctor who got me so wound up will at least think of my face and hopefully my words the next time someone shows up swollen, aching, and desperate in the name of Lupus. I have heard of people having amazing relationships with their rheumatologists. The kind of doctors who head up collaborative care among doctors to get patients well and thriving. But hearing about it is where it ends for me. I have a stand out primary care doctor and the kind of dermatologist that you could trust your life to, but I have never had a rheumatologist to write home about. The one I started seeing recently though, simply takes the cake.

I started seeing my new rheumatologist a few months ago when I got a new health insurer. We didn’t totally hit it off, but it wasn’t too bad. She was stand offish and she made a sour face when I showed her the vasculitis on my arm, but I am sensitive about that, so I chalked it up to my thin skin (ha!). When I left her office that first day, she sent me for blood work. Fifteen vials of bloodwork that took four sticks, the last one in my hand (ouch) to get ahold of. I thought I was going to pass out from sheer exhaustion. After that, there was a host of small things (mis-dosed medication, another wasn’t available, I had a reaction to a new generic, and so on) that fell like disease dominos and landed me smack in the middle of a flare–the most painful one I have had to date.

I suffered for a few days before emailing my doctor. She put me on a TON of prednisone and said to keep in touch. I took the ton of prednisone and it was like a beast was unleashed. In addition to a racing heart, I was so dizzy I was losing my balance, I was exhausted but couldn’t sleep. AND I WAS A MEANIE. At the prompting of my poor, suffering boyfriend, I went back into see the doctor face to face.

This is where the UNION sign comes in.You see, I had already had low expectations for this doctor caring for me. But when she met my sick, sad self with a pile of pain pills, and “Well, that’s Lupus. Eventually the flare will be over and you’ll feel fine.” I kind of lost it. I asked her to consider that people are more than the sum of their symptoms and test results. I told her we weren’t working out (like we were dating or something), and I did all of this while hysterically crying. In my experience doctors aren’t huge fans of tears. They are a more tightly laced lot. My rheumatologist looked horrified, but all I could think to myself was, finally I am getting through to her.  I eventually pulled myself together enough to finish the visit and head down for more blood work. I wasn’t done though because all of that went badly too.

God save the world when my hands don’t hurt too much to type.

PS: From the “well ain’t that a kick in the head” files, I just found this article from a few years ago: Real ‘Norma Rae’ dies of cancer after insurer delayed treatment

“The North Carolina union organizer who was the inspiration for the movie “Norma Rae” died on Friday of brain cancer after a battle with her insurance company, which delayed her treatment.”
Health Insurance. That is another post for another day.

Life, Liberty, and the Pursuit of Happiness Are For All Sizes

My journey through chronic illness as a young adult